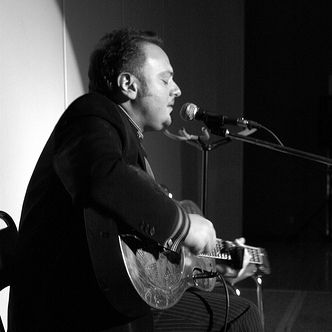 We have confirmed a show with David Gogo, as a Solo performer, for Saturday, September 26th indoors at the Osoyoos ELKS Hall.

Due to Covid-19 protocols we can only have 50 people in an audience. We can put about 12 tables in the hall each spatially distanced 2 metres apart.

We hope that you can get some friends together and buy tickets as groups of 4 to 6 people. All tickets will be $25 each. Members,  will get a $5.00 cashback when they purchase a ticket and attend the show. All tickets must be purchased prior to the show. You can do so by contacting krush.earl@gmail.com

We expect to have a Bar for this show. In order to reduce line ups, there will be table service.

Please read this the Audience Procedures page on this website for more information.

This will be a concert and due to Covid 19 protocols there can be no dancing.

David has performed on stage with the likes of BB King, Johnny Winter, Albert Collins, Bo Diddley, and Otis Rush. He has been chosen to open shows for ZZ Top, George Thorogood, The Tragically Hip, Little Feat, Jimmie Vaughan, Robert Cray, Robin Trower and Wishbone Ash. His songs are featured in films and television and have been covered by a variety of artists, most notably Buddy Guy.

He has also built up a solid reputation over the last decade as an acoustic performer with his solo shows that feature his vintage National steel guitar chops, as well as his entertaining stories from the road.

Lake days are truly endless in Osoyoos! The lake is calm and peaceful at this time of year - perfect for an early morning kayak or SUP.⁠ ⁠ 📷 @brendinkelly...
While Osoyoos may be known as a summer town, we're ready to help you fall for the desert this season. Take in the stunning foliage: from the crimson red vines to golden rabbit-brush in bloom...
As we approach the beginning of fall, we're looking forward to cool morning walks along our lakeside trails, sunny afternoon hikes, and stunning foliage.⁠ ⁠ Visit destinationosoyoos.com to plan your fall getaway....
And we’re back to blue skies ☀️ Here’s a real-time look from @mooncurservineyards 🍇 Conditions can change quickly, know before you go and visit destinationosoyoos.com/travel-alerts to view links to our live beach cam, air quality...
Tomorrow is the last Osoyoos Market on Main for 2020!⁠ ⁠ Visit the market on Main Street in downtown Osoyoos from 9-1 to find the best of our local bounty - including farm-fresh finds, baked goods, jams,...
The old "Welcome to Osoyoos" sign featured a modified version of BC's Coat of Arms to reflect our orchards, lake, and desert hills. ⁠ ⁠ Comment below if you remember this sign!...