David and Ken’s Comedy with Music is an audience fueled conversational comedy show with real stories, character driven improv scenes and hilarious, spontaneous songs with funky grooves and ripping guitar solos. Come join this playful-absurdist-adventure that will leave you feeling joyful and connected!

Fans of and inspired by Reggie Watts, Flight of the Conchords, Marc Rebillet, Bo Burnham, Tenacious D & the Smothers Brothers they have been fortunate enough to also perform with their improv heroes Colin Mochrie and Ryan Styles.

Get ready for music styles from Radiohead to Reggae with unexpected, clever and often ridiculous lyrics. Who knows, you may get your own personalized love song or help inspire the next catchy anthem about sustainable tofu farms.

David Milchard and Ken Lawson are award winning improvisers, musicians and actors who love making up songs based on your suggestions! David and Ken are members of the Internationally Acclaimed The Comic Strippers, Canadian Comedy Award Winners, Canadian Comedy Award Multi-Nominees, Streamy Award Winners and Nominees & The Second City and Vancouver TheatreSports Alumni. You may have seen them in these TV Shows & Movies: Altered Carbon, Supernatural, Flash, Hater’s Back Off, YouTube’s Convos With My 2-Year-Old (125+ million views), LouderMilk, iZombie, Adventures In Babysitting, Psych, Fringe, Sanctuary, Smallville, Arrow, Tim Burton’s Big Eyes, Robert Redford’s The Company You Keep & The Package. 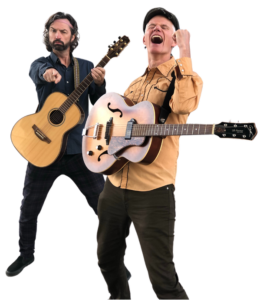