What a way to end the season!  The Montreal Guitar Trio, described by the CBC as the hottest guitar ensemble in Canada, will be performing Friday, March 20th at 7:30 pm at Venables Theatre, Oliver.   Presented by the South Okanagan Concert Society,  this Trio is guaranteed to be a crowd pleaser and judging by previous performances  a full house is anticipated.

The Montreal Guitar Trio is a “force to be reckoned with”.  For over 20 years, the trio’s virtuosity, rigour, creativity and impressive stage presence has won converts all over the world.   Humour and interacting with the audience go hand in hand with this group in hundreds of concerts in prestigious venues across North America,  Europe, New Zealand and Australia.

The trio is composed of guitarists, Sebastien Dufour, Glenn Levesque and Marc Morin performing on Bruno Boutin guitars.   They first met as classical music students at the University of Montreal.  This year they are marking the 20th anniversary of their first live concert.   That conservatory background hasn’t stopped them from tackling flamenco and tango, nuances of Indian and Arabic music, hits from Queen and Rush or even Emio Marricone’s music for spaghetti westerns! As a trio, they have released six albums and won an Opus award for concert of the year in the Jazz & World Music category.  In January 2017 the trio launched its 7th album “Danzas” in Montreal.  It pays tribute to the great composers of Spanish music such as Paco de Lucia and Manuel de Falla.

Tickets for the series are available now on line @www.venablestheatre.ca or at the theatre box office Tuesdays, Wednesdays or Thursdays from 10 am to 3 pm.  Generous sponsors make ticket prices affordable.  Any 2 or more tickets in advance are $21/ticket.  Single ticket in advance is $23 and at the door $25.  Children and youth are only $2.50.  Bring kids and grandkids and introduce them to top quality live music.

You can expect an exceptional concert when you arrive at Venables Theatre March 20th.  Don’t forget next year’s SOCS series will be revealed and early bird tickets available for sale in the theatre foyer. 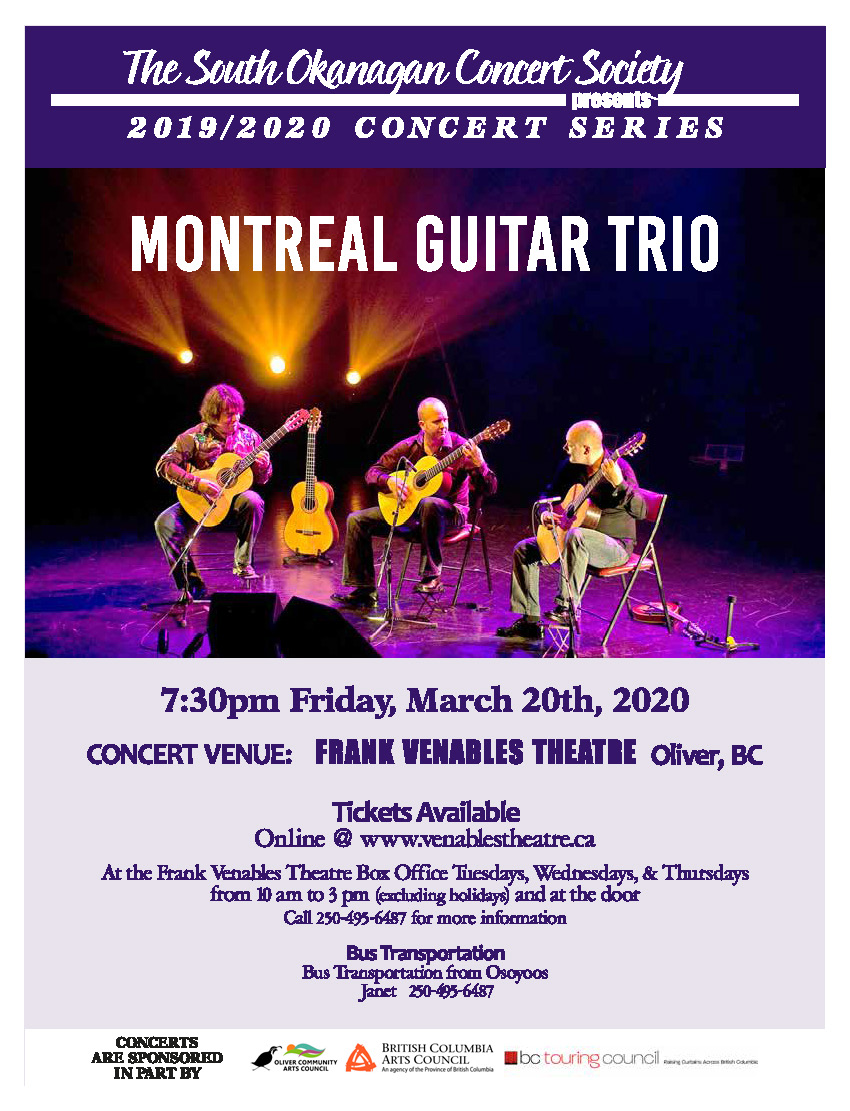 If you're in town, be sure to visit the Osoyoos Market on Main, happening every Saturday from 9-1 until September 12 🍒⁠ ⁠ With local farmers, craft vendors, bakers, artisans, wineries, cideries, and distilleries, you're sure to...
We raise a glass (or a bottle!) to our local cider producers in celebration of @bcciderweek August 6 - 16🍎🍻⁠ ⁠ Which South Okanagan and Similkameen ciders have you tried?⁠ ⁠ 📷 @orchardhillestatecidery...
There is nothing like taking in a summer sunset over Osoyoos lake.⁠ ⁠ ⁠ 📷 @dynostudios⁠...
This summer and fall, wake up with peace of mind at @watermarkresort ☀️ Enjoy their latest video on their updated health and safety guidelines. Visit watermarkbeachresort.com to learn more and to watch the full video!...
If you're visiting Osoyoos this long weekend, or are planning your trip for summer and fall, please be mindful and respectful in your travels.⁠ ⁠ Responsible tourism means that the experience creates a positive impact for all...
This summer and fall, immerse yourself in the unique Indigenous culture of Osoyoos – from seeing Kliluk (Spotted Lake) to indulging in Indigenous inspired wine and culinary fare. ⁠ ⁠ Visit destinationosoyoos.com/blog to learn more! (Link in...