This Season’s Performing Arts Series has an exciting season planned. It starts off with a concert on Wednesday, October 19 with a talented Rhythm and Blues Trio from Ottawa, “HOROJO Trio featuring JW-Jones”.  This talented trio won an International Blues Competition in Memphis Tennessee in 2020. They competed against bands from around the world.

On Wednesday, November 30, Steve Elliott, from Elvis Elite, returns to Osoyoos and will be presenting his “Christmas with Elvis” show. This  concert  will be a great show to start the Christmas season.

On Saturday, January 21, we will be presenting David Gogo and his Band for a Dance. David is well known in the Osoyoos area and has been nominated for a Juno 6 times.

The third concert of our series brings another returning performer, Regina’s Jack Semple will be doing a solo acoustic show.

Check out the Osoyoos Performing Arts page for videos  of these performers.

Single tickets are $25 each

Or purchase the three concert package (HOROJO Trio, Christmas with Elvis & Jack Semple for only $60.

The Four show package, includes the Dance, is $80.

Tickets can be purchased, now at the Osoyoos & District Arts Council Hub which is located at 8716 Main Street in Osoyoos.  The Hub is currently open Wednesdays, Thursdays and Fridays from 10am to 2pm.

Tickets can also be purchased here: 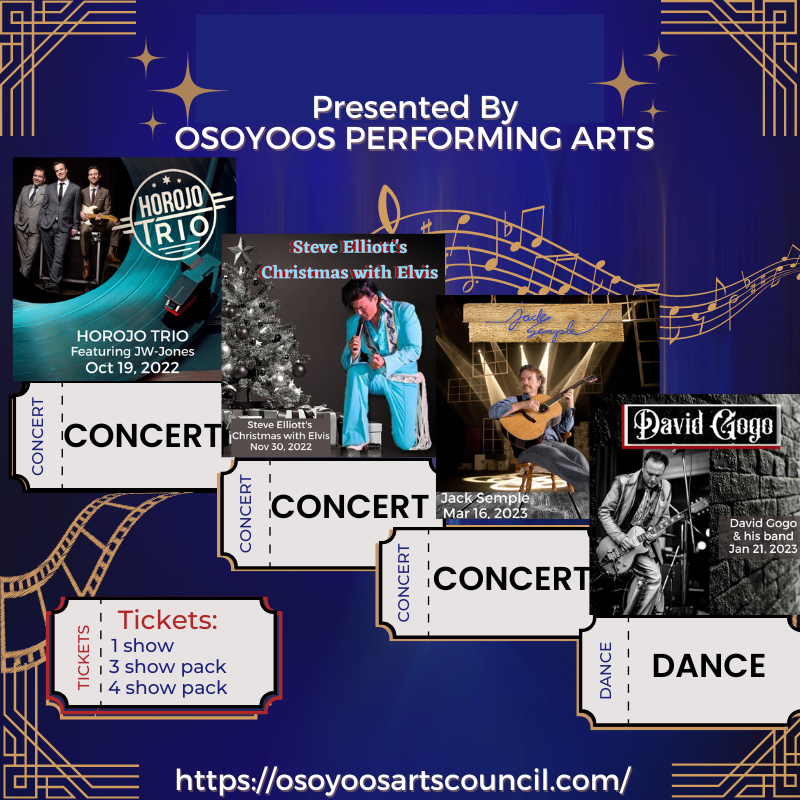