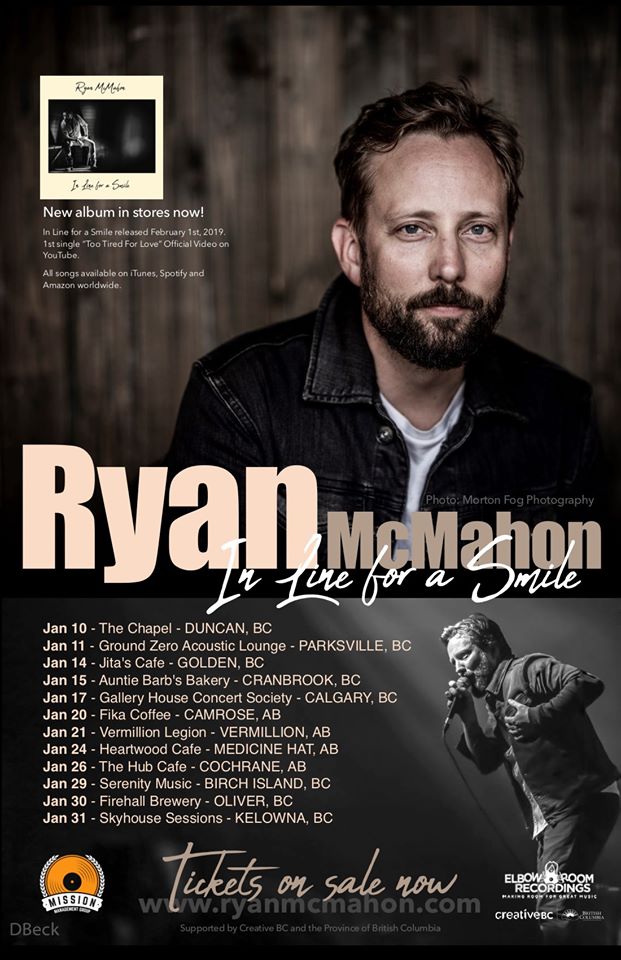 The Firehall Brewery is privileged to offer limited tickets to this incredible musician on Thursday, Jan 30th at $20 per person. Doors at 6:30 PM, We are licensed. We are the absolute best space and intimate atmosphere for your maximum immersion experience into music of this calibre. We are at 6077, Main St. in Oliver. 778-439-2337. Tickets will fly quick for this one.!!! Get a move on! Get yours!
…at The Brewery or https://www.firehallbrewery.com/event-details/ryan-mcmahon-concert

As a co-founder and arguably the most ‘out front’ of the 3 very ‘out front’ guys of Lion Bear Fox, Ryan fills not only the stage but the whole house wherever he plays. He has released five full-length albums, and seen his music licensed nationally and abroad. He has garnered 3 wins (Male Vocalist, Record & Artist of the Year) at the Vancouver Island Music Awards.
In April of 2014, Showtime’s original series, “Californication” featured the single “I’ll Be Damned,” a song that was included on “Put Me Back Together,” which came out April of ’15. On September 8th, 2017, Ryan released an EP titled “Song Shelter Recordings,” created entirely at his home studio in Ladysmith, BC and Legendary Canadian TV/Radio personality Terry David Mulligan may have summed up Ryan best: “The complete package. Singer. Songwriter. Performer. Troublemaker. Passionate human being. For me… priceless.”